Toyota’s Fine-T fuel cell hybrid concept made its U.S. debut at the 2006 North American International Auto Show. The concept vehicle made its world premier at the 2005 Tokyo Motor Show as the Fine-X.

Toyota’s low emission fuel cell hybrid system demonstrates how close a vehicle can come to having zero effect on the environment. The Fine-T is powered by a new downsized, high-performance Toyota fuel cell stack configuration. The fuel cell stack adopts a new alloy catalyst, which allows a dramatic reduction in the amount of precious metals used. The hybrid components are mounted beneath the vehicle floor, allowing greater cabin space and creating a low center-of-gravity. 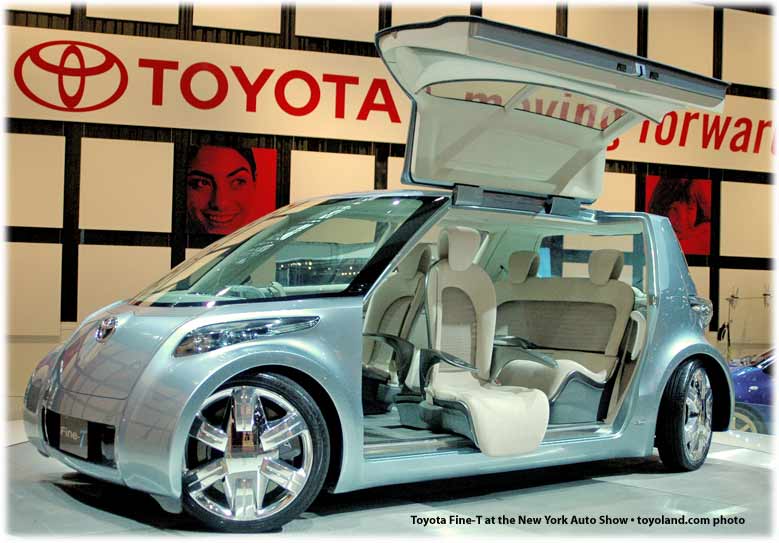 The Fine-T’s interior features a substantial amount of plant-sourced, “carbon-neutral” materials. These plants are considered “carbon-neutral” because they do not add new carbon dioxide to the environment when disposed.

For added visibility, the Fine-T is equipped with peripheral monitoring video cameras. A front-view camera installed above the license plate, a rear-view camera below the Toyota badge, and side cameras located at each side door handle allow the driver to monitor the periphery of the vehicle for obstacles on large display monitors. 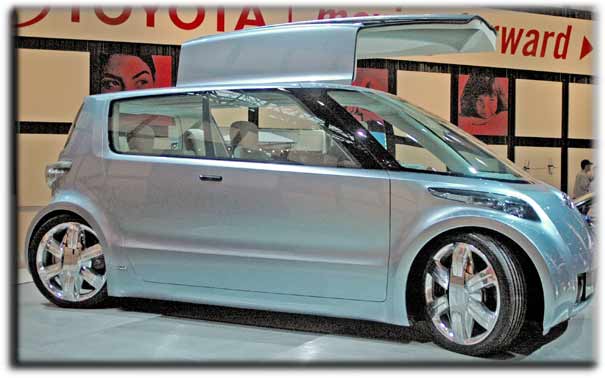 A drive-by-wire system connects the driver’s controls to actuators that operate vehicle functions. In front-axle/rear-axle turning mode, the vehicle can be turned around from the front or rear, which makes maneuverability easier when parallel parking. In directional change mode, continuously variable steering of the front and rear wheels allows a change of direction of almost the entire length of the vehicle in four directions. This feature allows for U-turns while coming out of parallel parking. The on-the-spot turning mode allows for convenient 360-degree turning on the vertical axis.

Ingress and egress is easy with the Fine-T’s wide gull-wing doors and “Welcome Seats.” Once the driver is seated, the seat glides back automatically to the driving position. To leave the vehicle, a press of a button moves the seat to the egress position allowing the driver to simply stand up to exit the vehicle. In addition, the drive-by-wire steering system stows away automatically when entering and exiting the vehicle.

Interior comfort is also maximized by the spacious cabin. The battery, motors and other operational components are mounted in the vehicle floor or near the wheels, thereby extending available cabin space almost the entire length of the vehicle.